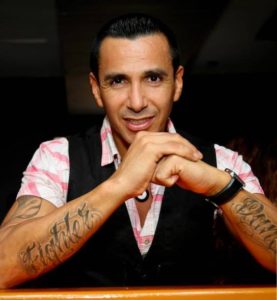 Vice World Salsa Champion, competitor, dancer, instructor and choreographer from Ecuador where he spent his childhood immersed in rich Latin culture and music.  He was fortunate to have trained with the world renowned Latin Dance instructors such as Jesus Aponte, Salamon Rivera and Vasquez brothers. He also had the opportunity to train in Argentine Tango with the World Champion Fabian Peralta.

As Oscar’s professional reputation grew, he was invited to appear in movies, most notably “Take the Lead” starring Antonio Banderas as well as other movies with leading actors such as Danny De Vito, Steven Seagal, Meg Ryan and Omar Epps. TV Commercials, Music Videos, Choreographing life performances – is all a part of Oscar’s extensive creative portfolio.

Oscar is well known in Canada and internationally as an engaging and fun instructor.

In addition to being accomplished Dancer, Performer, Choreographer, Instructor, Oscar has an impressive record as a Fitness Professional.   Oscar has loved Martial Arts since he was a child.  Oscar has trained and continues to train in Boxing, Kickboxing, Muy Tai, Jiu Jitsu, and Mixed Martial Arts.  When he is not dancing or teaching dance, Oscar can be found training at Evolucao Thai.  He trains with Alfonso “Alfi” Shihan and continues to grow and develop, concentrating on active, healthy lifestyle, discipline and motivation.